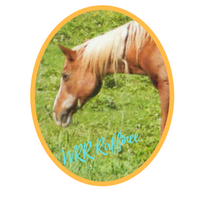 WRR Raffinee was born in 1983, bred by Sharon Radar of Ohio.
Raffinee is a true roan, which is very rare in Arabians. She has 21xs to Skowronek, 7xs to *Raffles, and 13xs to *Berk. Golden Reflection her sire was a Most Classic winner, sire of champions, and Reg 5 Top Halter champion.

Raffinee has had only three foals, all fillies. The first in 1989 was a chestnut “Mijestic Sunny”, next in 1990 she produced another chestnut “Sun Crescent” sired by Majestic Sun. WRR Raffinee’s last foal in 1992 was “Crystal Eclipse” sired by “Eclipse ofthe Sun”.

Raffinee was still with us, and doing well until she passed March 2015 ~ Raffinee and her daughter “Crystal Eclipse” came to us in 1992. Crystal was 6 months old at the time, and both are treasured mares here at Sunh-Kyst Arabians.

This grand lady lived a very happy life at Sunh Kyst Arabians to the age of 33 years old! Her photo below is the last one taken of her, Fall 2014 (age 32).